Here are 3 great choices for New Years Eve this year from the Trento D.O.C in the Trentino region of Italy.

All hand picked Chardonnay in early September from various communes of the Trento Province, several years maturation, color of yellow and pale green with aromas of fresh flowers, apples and hints of yeast, flavors of ripe apples, pears and bread, and long on the palate. SRP $24

Classic method sparkling wine from 60% Pinot Nero and 40% Chardonnay, the Pinot Nero vinified as a Rosé from the Trento Hillsides. Several years maturation. Pale red rose colors in the glass with bouquet of blossoming flowers, red berries and wild strawberries. Dry on the palate, clean, nutty with hints of damp earth, and a nice long finish. SRP $37

Ferarri got its start in 1902 when Giulio Ferrari studied in France and returned home thinking how well Chardonnay grapes would fare in the terroir of his native Trentino region of Italy. By 1906 he was already winning awards for his sparkling wines, and since he had no children, left the entire operation to his friend Bruno Lunelli*... since then Ferrari has won a record 22 Tre Bicchieri awards.

I found these wines available at the following spots in the greater NYC area:

Posted by Dave Trieger at 2:44 PM No comments: Links to this post

Ice Age Comes to the Lower East Side via Preserve24

After a four million dollar investment, and a year an a half of hard work, venture partners Terry Goggin and his son, artist Brian Goggin opened Preserve24 last spring. The space is a wondrous work of art, and one of the most expansive concepts for a restaurant I’ve ever seen. 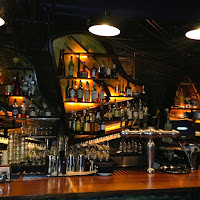 Serving as a multi-disciplinary art installation, the eye-popping interior utilizes old and new implements for an upcoming 2014 expedition to Greenland. During this expedition, a two-ton iceberg will be extracted from an ice-age glacier, then brought to New York and installed in a reliquary inside the restaurant.

The owners feel this unique installation of ancient ice is the perfect demonstration of the effect man has had on planetary change, and will serve as a reminder for all of us that the only way we can reverse the damage already done is by becoming aware, sustainable, and most importantly, accountable. 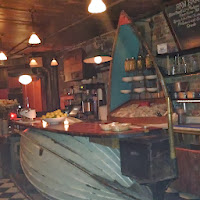 Brian Goggin, along with fellow artist Peter Cole designed the interior with amazing attention to detail, from the wall of ice-cutting tools to ceiling fans made from bakers paddles, as well as oars, and a propeller. Each room is like a three dimensional collage comprised of all sorts of repurposed items like beer tap handles made from piano foot pedals, an 1860 oyster boat reconstructed into a raw bar, and a piano bar made out of...you guessed it…old pianos.  In the kitchen there’s a wood-burning, potbelly stove (affectionately named Pavarotti) where Chef John Parlatore uses local proprietors and purveyors in an effort to operate his kitchen with a minimal carbon footprint. There's so much to take in, that at first it's a bit of a sensory overload, but to my mind it's the perfect excuse to go back again, aside from the food, which is spectacular.

My friends and I whet our appetites with the Sea Witch, a diabolical concoction of vodka, Jalapeno Chartreuse, lime, and passion fruit puree, then shared a mix of mouth watering appetizers including such raw bar favs as oysters, spicy lobster claw and jumbo shrimp, followed by roasted bone marrow with crispy guanciale, and parsley and onion marmalade. Our main course included organic roasted chicken,  a cooked-to-perfection 40 oz porterhouse steak, truffle fries, roasted vegetables, and charred broccoli with cheese sauce, as well as local mushrooms, accompanied perfectly by a bottle of Pitch Cabernet Sauvignon 2010 from Washington State. Dessert was a heavenly, homemade banana and chocolate ice cream topped off with Weavers coffee.

Our conclusion: Preserve 24 truly is a feast for the eyes, for the belly, and for the soul.

Posted by Dave Trieger at 6:39 PM No comments: Links to this post 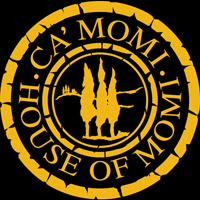 Three Italians run Ca' Momi in Napa Valley - Dario De Conti, Valentina Guola-Migotto and Stefanno Migotto. After pruchasing a 9-acre vineyard growing Chardonnay, Pinot Noir and they just bought 10.5 acres of prime Carneros Appellation real estate from legendary winemaker Kent Rasmussen. In the early 1970's Mr Rasmussen successfully planted Pinot Noir and was pivotal in making Carneros one of the worlds premier growing regions. I can't help believing that the amalgam of old and new world winemaking techniques can only improve the quality and diversity of the wines of the region.


"The grapes from these vineyards have been a part of our Napa Valley wines for some time," says Dario De Conti, C.E.O. and Winemaker for Ca' Momi. "We love the fruit, and the wines have been very successful. We really believe in the future of Napa Carneros and are thrilled to join the fantastic family of wine producers in the region. These vineyards will secure continuity of style for our Napa Reserve Chardonnay and Pinot Noir for decades, if not generations to come."


The Pinot Noir vineyard is fully permitted for a winery and tasting room. "We are moving forward with plans for a winery on that property," says De Conti. "It will give us additional winemaking capacity, and will also give us a beautiful location for hosting visitors."

Posted by Dave Trieger at 9:37 AM No comments: Links to this post 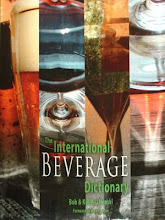